The growth momentum of the global steel industry will be sustained 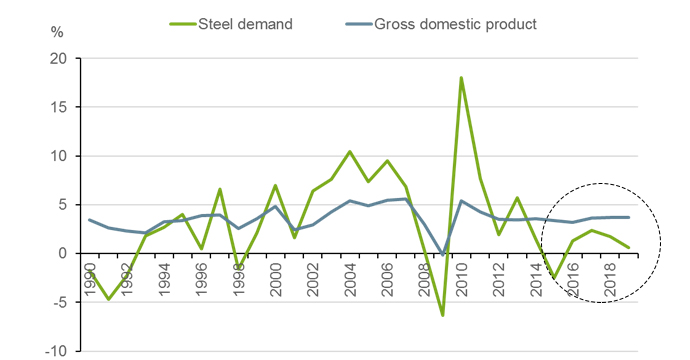 The most obvious reason for this can be found in China, where growth of steel demand has been much lower than that of GDP since 2014. But when we examine other countries, the same phenomenon is also observed, although to a lesser degree. So, we are led to believe that this is an early manifestation of the megatrend forces that the steel industry is facing. The most important of these, which is expected to have a far-reaching impact over a long period of time, is believed to be the circular economy trend.

Implementation of circular economy principles within our society is just at an early-stage now and its wider application will affect steel demand in many fundamental ways; through recycling, sharing, reuse, and remanufacturing practices. All this will make the link between steel demand and economic activities weaker in the future. We experienced a similar situation in the past: following the oil shocks of the mid 70’s, the rise in energy prices and resulting energy saving efforts led to a lasting decline of steel use per GDP.

However, the steel industry was able to respond to such structural change by being innovative –  the creation of lighter but stronger steels.